Some facts about desi ghee 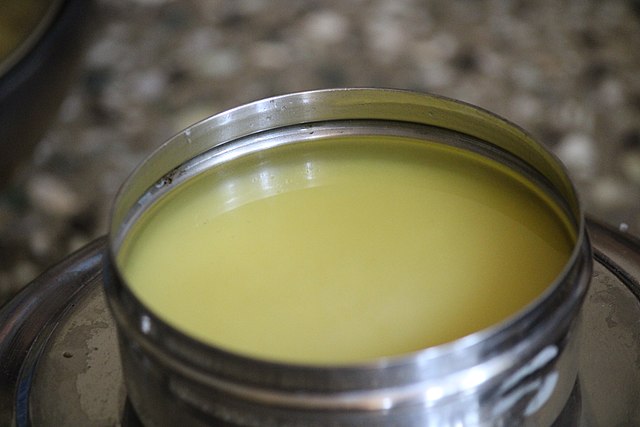 How is refined oil manufactured

Refined oil is cooking oil extracted from plants like peanuts, sunflower, palm and so on. In old times, people used to ground the seeds or nuts and extract oils to be used for cooking. This process is called cold-pressed which was available till modern technology kicked in. Cold press process does not give the clear and consistent oil which we see in the bottle which is commercially sold. For that the oil has to be refined. It is also called purification which is misleading as we shall see.

There are four steps involved in refining. First oil is heated to between 40 and 85 degrees Celsius and mixing it with chemicals to remove fatty acids. Next it is degummed with water to remove the phosphatides. The next step is removing the pigmented material like waxes which allows the oil to solidify when kept in refrigerator. This is done by bleaching. In the last step the oil is deodorised by passing steam. All these steps basically improve the shelf life of the product. It also makes the oil clear, odourless and consistent.

Refining oil is a fairly recent process. It was invented somewhere in 1850s. The process kept evolving and improving till 1901 which was the era of refined oil. But why refined oil? This answer is closely connected to the food requirement of the world. As the population went on increasing and cities getting crowded the demand for cooking oil rose. The old method of pressing requires lot of power and machinery. It leaves behind almost 20% oil which has to be thrown as waste. Solvent extraction method leaves behind just 0.5% oil in the residue. It is done using chemicals.

Today the refining process itself has come under lot of scanner especially from social media. The heating and chemicals destroy nutrients in the oil. Plus the blending process reduces cost of oil but brings in harmful trans fats in the oil.

Oil extracted by the cold pressed method from peanut, coconut, sesame, mustard and safflower can be consumed without refining. However if oil is extracted from sunflower, palm, soya bean, cottonseed and rice barn have to be refined for consumption due to their extraction process. Last hundred years there has been increase in cancer and heart related diseases which were earlier rare. Lot of that has been attributed to consumption of refined oil.

How is desi ghee made

Desi Ghee was invented in ancient India. Due to the hot climate other forms of butter used to go bad, but desi ghee can be stored without any refrigeration. Ghee is held in high regard throughout India for its healing and nourishing properties. It is used to lit lamps believed to purify the air.

Each household in India has their own secret recipe to make desi ghee. But the most common process is as follows.

While this process is the modern way, there is also the Bilona method which was used in old days.

It was followed in ancient India that desi ghee was prepared only with grass fed cows. This has now been studied because this introduces CLA in ghee which helps to regulate weight and combat obesity. Since milk solids are removed, desi ghee is also lactose free.

Why desi ghee has got a bad name

After reading the article till now, one thing is clear, we have refined oil which is factory made using chemicals and treatment and on the other hand we have desi ghee which is made at home without use of any chemicals. So let us get in the history of how desi ghee got such a bad name as it is today.

We Indians sometimes go a full circle. Recent cases of foreign countries filing patents for basmati rice, neem and the healing properties of turmeric were revoked only after the intervention of Indian government. Desi ghee was labeled bad by foreigners who are now singing its health benefits. Many Indian doctors and dieticians also claim that desi ghee is bad for health. Some believe that because of it being calorie right might lead to weight gain.

A mother of two, Preeti Bhandari is a colloquial writer. She believes in simple living which reflects in her writings. As the Editor of Narisakti, she intends to use her vast experience to propel this platform to a cult status among entrepreneurial networks.

When not writing she is quilling, both with paper and thoughts.